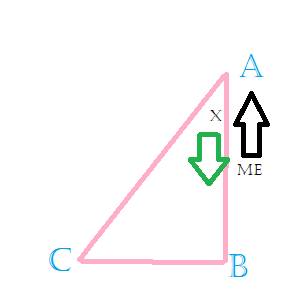 There’s some girl in pants costing no less than $125.95 standing at the x, posing for a few selfies pre-run. Once she sees me humming, the faux smile fades, the camera slides into a nifty side pocket, and she begins running in earnest. For she thinks she knows what’s coming. She thinks I’m going B-A-B, a popular route, no doubt, and she, like any person raised in this brutal dog-eat-dog world, wants to win. Still, while getting passed with her considerable head start would be unpleasant, it’s salvageable under some invented story about my genetically advantaged lung capacity. If that unfortunate outcome did indeed occur, she’d still probably receive credit from her friends for trying so hard on a Saturday when they themselves were busy indulging in “mindless” activities. What this poor victim didn’t know, however, was that I was going B-A-C-B, and losing the race to B given my impossible handicap would not be at all o.k.

Worse still, because she decided to never turn around, whereby she could have quickly understood I wasn’t going B-A-B and appreciated the humiliation risk in play, she assumed the lack of huffing and/or footsteps behind her meant the race, with 100 meters to go, was hers. Her mind thus drifted to which witty line or two to place underneath those pre-run selfies she now simply could not wait to post. The BE IN THE MOMENT gospel misses the beauty of daydreams like this. The moment was filled with one final climb, and she’d rather just skip ahead, in her mind, to what was to follow. No sensible person could blame her. Unfortunately, she happened to be dealing with a true menace, a menace who cares not about sensibilities or loyal IG followers.

The last anyone saw her, she was headed to xxxxxxxxx. I sure do hope they aren’t out of ventilators.